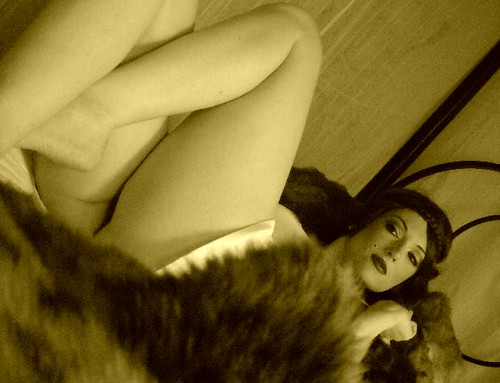 I was in the hospital the day after the Dominatrix photo shoot.  (This is another pic from that shoot – the model is a beautiful dom named Lily Hex).  If I had to get sick, I’m glad it happened the day after, instead of the day of the shoot (that’s how I missed the last one).  But, all the same, the episodes of my stomach problem that warrant hospitalization are pretty grueling experiences.  We were totally broke, aside from my disability check (which I had not yet cashed).  We had around ten bucks on us.  I knew it was a bad idea to have that little cash around, but I figured I would cash the check at Charlie’s bank in the morning (to avoid the fee I would have to pay if I went to a Currency Exchange).  Well, the next day, I was too sick to sit up without throwing up.  Cashing a check was out of the question.  I don’t even know if a cashier would have dealt with me, under that level of duress.  So, we did not even have enough money for a cab to the hospital (an ambulance was out of the question because they woud take me to the nearest hospital, and I have had nothing but terrible experiences there – drug addicts, whether they currently use or not, are treated as less than human there.  I had to geta cab to the hospital my doctors are affiliated with – Evanston Hospital.  They always take care of me.  I just had to get there.

Charlie came up with the idea of cashing in our change, on the way to the hospital, in order to pay for the journey.  This was a solid idea.  Our change reserve was considerable, and the hospitalization drama did consume the full amount he cashed out.  It took a while, inside the Currency Exchange, for Charlie to get the change processed.  I was waiting for him in the cab, moaning and whining, and the cab driver eventually asked if he was coming back.  I told him he definitely was, and, of course, he did.  We got to the hospital, and Charlie got the attention of staff, before having to run to the clinic himself.  I was in so much pain.  I cracked off one foot of a wheelchair, just pressing my feet down, writhing in pain.  Charlie did not want to leave, and I did not want to be left alone, but there was nothing to be done.

He hugged me, and kissed my forehead.  Out of my mind with pain, I spoke without thinking.  I usually censor my words when talking to him, to make him more comfortable, but through cold sweats, tears, and intolerable pain, I whined, "I love you."  He gently responded that he loved me, too.  We hadn’t said that, in what seemed like forever, and we haven’t said it since.   I don’t know what it really means.  I was ill.  The circumstances were…  severe.  He could not get out of work, but he came back after outpatient to check up on me, and he returned that night, after his shift was over.  A nurse appeared in my doorway, very late, and asked if I wanted my husband to be allowed up, into my room.  I said, "yes."

Charlie came in, and situated himself in the recliner beside my bed (I had no roommate).  He fell asleep quickly.  I asked a nurse to bring me an extra pillow, and after she left, I gave it to Charlie, who drowsily accepted it.

I have been feeling really strange.  I am going to call my shrink, tomorrow.  It makes sense that I would feel odd, being so sick, lately, but I still need to check with him.  I also have to check in with my G.I. doc, and my primary care doc, because of my recent episode.  Too much to do…  and it gets in the way of what I WANT to be doing.  I never have the strength, the energy, or the will to do everything I am supposed to do.  Everything I want to do…  and, I am still so confused about so many things.