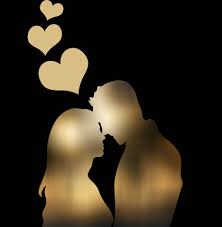 Do you see it?

The way he looks at you, the way he stares into your eyes as you speak, you can see him getting lost in your eyes, those bright brown eyes that you once called oh so dull, now have come to love because he can’t get enough of them. The way he smiles when you hug him or the way he goes out of his way to make you laugh just to hear that lovely sound that you once hated. The way he texts you when you are in class knowing you are bored. The way he thinks about you 24/7 but has never told you because he is to embarrassed to seem weak around you.  The way he playfully pushes you when you guys are together. The way he lets you fall asleep on the phone as he knows you are afraid to be alone at night and whispers  “I love you beautiful” after he knows you have fallen asleep because even though he wants to say it to your face he is afraid you don’t feel the same. The way he will call you day or night to just ‘talk’ to you, even though he only called because he missed you soft angelic voice that you believe sounds rough and annoying. The way he hugs you when you cry holding you tightly letting you listen to his calming heartbeat afraid if he lets go you will leave.

The way she gets annoyed at him starring at her as she talks and feels uncomfortable. The way he texts when she is in class and even if she is bored she gets caught with her phone. The way she brushes off his joke with just a simple laugh. The way she always texts other guys and ignores most of his calls not wanting to be bothered. The way she is with another guy falling asleep most nights when she tells him the next morning that she had fallen asleep before they could call. The way she feels awkward when he hugs her because she is crying. The way should could never say she loved him because she would never really mean it.

Through his eyes she is the one and only, through hers he is just another one to hurt her.

He has had it rough but so has she, he doesn’t know this though. He only saw her as perfect, that’s all he would ever see her as though.. she didn’t understand that so she pushed him away afraid to be lied to, she knew he’d find someone better. For her, she did love him.. She just forced herself to believe she didn’t.

She was broken by her past and  she lost herself, she wasn’t that girl he thought he knew. After 2 years of this.. lying and hurting she left him. she made herself believe he was lying to her about everything which hurt her. He didn’t know what to do, he was lost after being so emotionally attached to her. The day she left was the day he knew it was over. He had lost the one person who he thought loved him. He stood by the ledge and contemplated life seconds later he heard her voice but it was too late. His foot slipped before he realized it he was dangling of the edge and only felt her soft hand clinging to his. her voice says frightened “don’t let go!” she uses her strength to help him up and wraps her arms around him clinging to him for dear life.  “i love you” were her last three words she said before she turned to dust and faded from his vision. Her sweet scent was the last thing left behind.