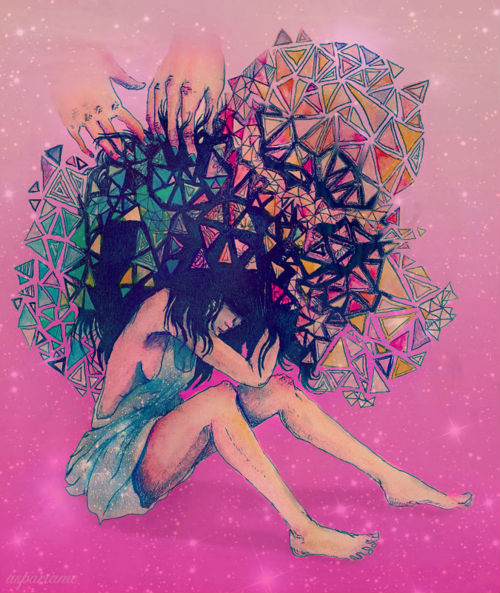 i can’t help but feel like a complete and utter failure.  i haven’t even begun to get anywhere with counseling, as of yet, since i’m still beginning–again–but, i keep trying to not give up.  i just took the scissors and my first aid container to the bathroom….and just kept trying to fidget so i wouldn’t do it.  Nothing’s really changed, at all, but in a conversation i was having with my ‘husband’ a lil while ago, he made sure to tell me he’s “moved on”…..and, he also felt that the way i left, made it clear that i was doing likewise.  If i could just take my brain out of my skull and reprogram it or shake it a lil…just try to make some sense of this thing that has become my ‘life’…..would it really make any difference?  Or, would i just keep making bad decisions, one right after another?  i’ve been a wreck for years, now.  i know it.  Doesn’t matter what kinda act i put on or how i seem to others.  i’ve been broken for so long, now.  i’m tired.  My pieces don’t want to fit back together, yet–or so i feel.  i don’t know what i’m supposed to do, anymore.  i feel like the next person who touches me is gonna push me over the cliff….It’s not important enough to call the counselor–or i  don’t think so–so, i’m writing to keep my hands busy, sorta.                                While i was on the phone with my husband earlier, i watched three lil birds and their antics around the pond.  Two of them seemed to be a couple and the other just wanted to tag along, or so it seemed.  It was obviously annoying to one of the other two, so that one chased the lone bird off, a couple times, only for it to return.  It’d keep it’s distance for a lil bit, but still, try to get closer until it was chased away.  They act like kids….no better, no worse, just like ’em.  It made me giggle some, but reality set back in, when my husband spoke.  i know he doesn’t understand a lot of the thoughts i’ve had and continue to have.  Heck, neither do i.  It just seems like i’m continuing to be that freakin hamster on a never-ending wheel of troubles.  Doesn’t matter, anyway….all the damage i’ve already done–or has been done–to my body is going to cut my life shorter, as it is.  *sigh  Am i expecting too much for there to be something positive in the works–at least a decision on where i’m going, anyway–by June?  Or, am i just dreaming?  Guess i’m gonna have to ask my counselor that one, when we have our next session….  And, of course, while i was looking out the window, i noticed the mold growing, again, on the window.  *sigh  So, of course, i had to scrub that, and take care of that, right away.  i already have issues with breathing, and mold on top of it?  No thanks.  Just can’t seem to catch a break.  —the story of my life in a nutshell.  FML.