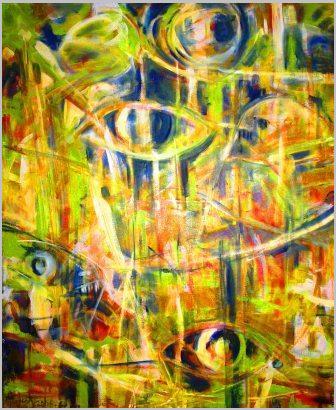 Lately, I have interrogated myself about the reason why, the plastic arts came into such rupture, and for this same reason, I tried to understand it, due to the constants abrupt changes that has happened on these last years and many of us not even has noticed we got into a new period of time, the era of globalization.

Many people can ask themselves what globalization have to art and I can assure you that, on my point of view it has a lot to it, after all, I am a plastic artist and along with some artists I have struggled a lot, inside and outside of me to understand the reason of this rupture that has been felt for such a long time.

It was like this that after struggling about this topic, I decided to give a name to this artistic movement. After thinking over carefully I named it GLOBALISM, because I believe this same name is going to fit into it perfectly; after all, there is something inside myself that tells me the contemporary era has come to an end and it happened in the end of the XX century.

Along with the end of this era, it comes another one, the era of the globalization. For many of the possible contemporaries this statement can sound ridiculous to their ears, because nobody wants to be left behind, I myself make part of this era, but I accept that the time of change is on the corner and it is necessary to believe in this new period of time.

I am aware that the world crosses one of its worse crises: to accept that, from now on, the globalization begins to get in front of all events and movements and the one who opposes to this will is also going to be left behind, because it’s the same of getting stuck in the past. There are times when we can take decisions and others we just can’t, because we are not owner of our own destiny.

The destiny has its metaphysic beginnings and it follows them, as well as each one follows a certain line of ideas, not even knowing that these same ideas are the continuity of the new ones that slowly are being produced. I believe in the destiny and I know that it is already a totality. The destiny of the nations, the destiny of the art for the art…, the destiny of each one of us when are interconnected. At this right time the humanity's destiny is being drawn, because if we look around us, obligatorily, we are forced to accept that the technology and the computer science arrived and along with it, a new period of time: the globalization era, that, from now on, it’s on everybody’s reach.
I am talking about the internete, because it is providing a totality for all and the plastic artists have to accompany this same progress, so that they can get their ideas across easily to be recognized at the same time they generate along with that more knowledge in a high cultural level to those ones who have never seen a masterpiece.
Through the globalization the Globalists will get into every one’s home, once the humanity, at the most of the time, doesn't have time to leave their hoses to see and live a little bit of what art can provide them.

Now, I invite all the artistic to join this movement to achieve one purpose: the popularization of the art for the art through internete, within a line that provides to the ones who have never had and give back to the ones who have lost the taste to really appreciate art.

I would like to make it clear that all the forms and kind of arts are welcome, because what really matters is the message each one of us, artist, has to transmit.