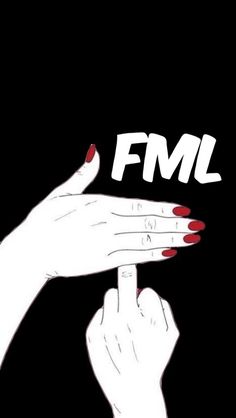 So, it sucked. I had everything perfect, all the food and shit. Then my dad decided to visit before the party started and fucked my mood over. He found out that my aunt moved in and kept saying over and over again “when did she move in?!” which made me go hide in the bathroom and fucking die. He was just overall a dick. Oh, and he brought my sisters and my stepmom, who just, I don’t know, abused my verbally and physically for 10 years no biggy. So yeah seeing her triggered some happy memories and a sprinkle of depression. So thanks, dad. And then he hugged me and told me how much he loved me and then proceeded to demand that he come pick me up on Saturday to go ‘hang out’. My therapist even says to avoid going to his house at all costs! he kept pressuring me and asking over and over and saying that my sisters missed me and shit. I’m like “you can actually eat my ass.” Its like BRO. bro. fuck him. He’s like 6’2 and someone that huge pressuring you isn’t easy to say no to. I felt like I was going to fucking die I was so scared. And now I’m letting it mess up my week. Not to mention towards the end of the party everybody went off to do an exorcism or some ouija board shit, it was weird and a couple people were weirded out and timid and shit so I had to fucking babysit because I’m the host and other crap. It’s like what the hell. Em**y just started that shit because she’s an attention whore saying crap like she’s haunted by her grandma and crap. I set up all this shit up and planned all this crap and then towards the end they just dip. I wouldn’t mind if it was more normal but it was like, pothead/crackhead shit. In a bad way ha.

DMV Cognitive Behavior Therapy and Life Coaching Services
Counselor/Therapist
Gaithersburg, MD
VIEW PROFILE
If you are lost, looking to make a real change in your life but do not know the path to take, you need to contact me. IF you are facing trouble with your spouse, or any other family members, we need to talk. If you are dealing with problems at work or lost in your career search, I am the person to talk to. If you are looking for ultimate happiness, I am your ONE stop shop. Let's get started.

Dr. Rebecca Fleischer
Psychologist
Fairfax, VA
VIEW PROFILE
As a licensed clinical psychologist for 20+ years, I understand that the relationship and "fit" between client and therapist is paramount. I work hard to establish and maintain a relationship based on mutual trust and honesty. We can work together to help you feel less stuck, and more in control.
ONLINE THERAPISTS
NEXT >

Ellen M. Neal, L.C.S.W., C.C.T.P.
Licensed Clinical Social Worker
Online Therapist
VIEW PROFILE
Everyone struggles at some time or another. That's life. And when the struggle becomes unmanageable, that's where I come in. As a sensorimotor trained therapist I offer a calming, non-judgmental, and supportive environment to explore your struggles. Part of that exploration may involve how your past intrudes upon your present, and your future. We work together to make sense of what is troubling you so you can become empowered to make the changes that will benefit your life. Are you worth that exploration and making those changes? Absolutely! I look forward to connecting with you.

Christy McGurgan
Counselor/Therapist
Online Therapist
VIEW PROFILE
I am friendly, kind, gentle, supportive, knowledgeable, and empower you to reach your potential. Whether you are looking for a Soul Makeover or some support through a trying time, welcome! Let's do this together.

Kimberly Faulkner
Art Therapist
Online Therapist
VIEW PROFILE
Life can be overwhelming, especially with all of the pressures of society and daily responsibilities. Art therapy can provide relief from a myriad of symptoms, including anxiety, stress, burnout, or perhaps processing a new medical diagnosis. Art-making and creativity add an uplifting quality to the session while infusing meditation, mindfulness, and other creative techniques to assist in the process. There are infinite possibilities for progress and transformation.

Coach Kay
Life Coach
Online Therapist
VIEW PROFILE
I am your personal life, love and intimacy coach dedicated to guiding you to clarity in order to reaffirm your life's foundation.