I have been here for 6 years, and have yet to post a blog! Lol.

Anyhoo. Summer of 13' was freaking amazing. You know the saying "Things get worse, before they get better". Yeah, that. I was admitted to the hospital around May for suicide attempt. I won't bother going into reasoning for that, because it was quite silly. But anyways, after a life of refusing to take medication (for fear of overdose, lmao. Ironic, right) At the hospital I was pretty much forced to take medication(not really, but the argued me to point I just took it so they would shut the hell up, lol). They put me on Lexapro and Ativan. Oh my God. I felt amazing. I think it took about a week for me to notice a difference, and it was huge. I felt like I could take on the Woooorrrrllldddd. I've never been so… stable, and I don't know know! It was just awesome. I even made some friends at the hospital. After a few weeks of being there, I was discharged. I was ready to experience life. I was hanging out with a girl from the hospital for the longest time, and she even had a cute brother. He was in a band. He had long curly hair. He reminded me of a hippie, I don't know.. But, I fell head over heels. He was 21 so he could buy alcohol, so that was my weekends! We'd get some food, find some people to hang out with and get drunk! Lol. Doesn't sound like much of a life, but I was having fun. And of course, me, being the naive 18 year old who never even kissed a boy before, had sex for the first time. Without a condom… Womp womp. 4 weeks later.. I was throwing up everything. I think I lost 20lbs in those 2 weeks, I just knew… I took a pregnancy test, and there it was 'Pregnant' .. I was terrified. My friend kept telling me to get an abortion. I'm not going to lie, I was strongly considered it. I went to the doctors anyways, I still had the intention of getting an abortion. And then they checked for the heartbeat. There it was… I was so shocked I think I actually cried, I wasn't expecting that at all. I couldn't do it. A week later I went in for an ultrasound. It was the cutest thing I've ever saw. I told my mom it looked like he was holding a little balloon. I fell in love! 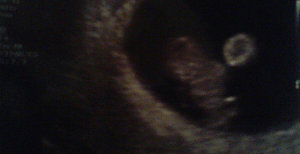 The medicine I was taking to keep everything under control was deemed unsafe for baby. I mean I probably could of took it, but there was a big chance of him popping out looking like a creature from Wrong Turn, and I did not want that. Haha… So I quit, cold turkey. It was harsh. I didn't realize how dependent on Klonapin I was. I had really bad withdraw symptoms for at least a month (it felt like years) and I was having panic attacks out the ass. It was horrible. Days on end I would be sitting there in full panic mode for hours, and having morning sickness which happened to last all day. Lol. So yeah, emotionally I was a wreck. I told all my counselor at the time about how I was feeling and she told me I was considered too high risk for their services.. It was therapists in training, so sessions were free for teenagers, which was awesome cause I didn't have insurance. So yeah, I got dumped.. I relied solely on my mom for the longest time, she tried her best, but it just wasn't enough. Fast forward.. Like December. I was having tons of chest pain. I seriously thought I was having heart attacks, angina, I don't know.. Something was wrong with my heart, so I thought. I was convinced. So I was going to the ER so many times, and they would tell me 'Oh it's probably just baby' 'Nothing's wrong with you, stop coming here' (not really) so I was on a 24hr holter monitor, and they did an ultrasound of my heart, chest X-rays, blood work, and nothing. I was so scared, I thought any moment I was going to die. This awesome man who I will refer to as my savior gave me this inhaler. It was gone. (blah blah blah turned out to be mild-asthma) Fast forward again.. February. I was getting so depressed. I didn't want to get out of bed, I didn't want the baby, I just wanted to die.. I decided to get help. so I called and got an apt with a therapist and psychologist. She put me on Welbutrin, and Celexa! It helps a little. But meh. I miss the old meds.

Anyways, lately has been pretty poppy. I'm not nearly depressed as I was, but I'm just feeling really down. I'm 32 weeks pregnant at the moment, and I haven't had any complications, until recently. Little Jesse (oh yeah I forgot, It's a boy!) decided it would be a good idea to try and come early, so I have contractions, they gave me medicine that doesn't stop contractions completely, just enough so I don't go into labor. And contractions freaking hurt. Worse pain ever. I'm also severely anemic, so I have to go to ambulatory care at the hospital 3 times a week to get iron infusions. My arms are so sore from all the IV's. I've been put on bedrest for the rest for the next 8 weeks..I love my baby, and I wouldn't trade him for anything in the world. But I'm getting so bummed out. I'm so worried about labor, and him. I can't sleep because I worry so much. I can think of 100 reason why me or him won't make it. I make myself sick thinking about it. Literally. I've been so strong these past months, but it's getting harder and harder. I just want to crawl up in my bed and cry.

I'm trying to stay positive though!