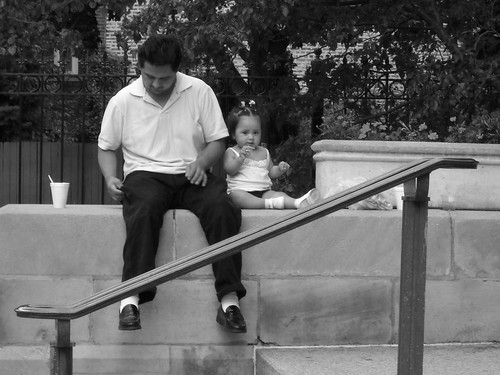 I can’t make myself productive.  I keep trying.  Everyday lately, the futility of my efforts has made me want to quit, but every day I get up and give it another shot.  What else can I do, other than give up and die?  And, while that has it’s occasional appeal, I know there’s enough that I want to live for to make sticking around worthwhile, and there are people I need to be there for – people who really need me (God only knows why they ever let themselves need a basketcase like me – what were they thinking?).  I’ve been much crazier than this.  I’ve been way worse off – I have to keep telling myself, as bad as things seem, it’s temporary.  My worst moments are just rerun thoughts about past pain, or the bipolar disorder putting extreme feelings and notions front and center in my head (or both – PTSD and the bipolar deal are a bad combination).

"Drink up, baby, stay up all night
The things you could do, you won’t but you might
The potential you’ll be that you’ll never see
The promises you’ll only make"

I have always liked the picture I posted with this entry.  I took it some months ago, walking around my neighborhood, early in the afternoon on a Sunday.

I have been having some bad dreams, lately.  Not recurring stuff, just random sh*t.  A close friend has been having horrifying dreams that are wrecking his sleep.  I am worried about him.  He’s already going through so much.

I am not there for anyone the way I want to be, right now.  I am not even taking care of myself the way I should.  I can’t even get myself to clean this messy apartment.

"Drink up with me now and forget all about the pressure of days
Do what I say and I’ll make you okay and drive them away
The images stuck in your head
People you’ve been before that you don’t want around anymore
That push and shove and won’t bend to your will
I’ll keep them still
Drink up, baby, look at the stars, I’ll kiss you again
Between the bars where I’m seeing you
There with your hands in the air waiting to finally be caught"

I think too many things, in quick succession.  I think about being attacked, and I hate myself for not being over that shit.  It was fourteen years ago.  But, it took so much from me, and warped my mind so much.  It wasn’t the only thing, of course – a complex set of circumstances fed my situation, and made the mess I am.  And, I have always felt like there was something really wrong with me – something people would get the hell away from if they could really see it.  And, I know it doesn’t all come from that event, but that sh*t sure didn’t help.  For one thing, it permanently tangled up sex and violence in my head in a way that seems undoable.  I don’t care as much as I once did about that.  Went through some excruciating therapy to undo it – didn’t work a lick.  Just made me averse to masturbation for years and years (still not wild about it).

Brandon Johnson Infertility Isn’t Inferior
Counselor/Therapist
Online Therapist
VIEW PROFILE
I believe that we all have stressors and concerns that we have to deal with, while trying to hold ourselves together. This can become overwhelming and cause us to become angry, anxious, depressed and overwhelmed. Together lets work together to help you become your optimal self. I look forward to working with you.

Therapeutic Ventures, LLC
Counselor/Therapist
Online Therapist
VIEW PROFILE
Are you struggling with how to pick up and carry on in a relationship damaged by betrayal, lack of trust, addictions, trauma, infidelity, anger or stress reactions? Are you trying to get your footing and self confidence after a crisis or setback in your personal or professional live? I offer a safe environment to process the past with compassion and make important decision for the future. Working abroad for eleven years has helped me develop an understanding of the conflicting pressures many clients face when seeking counseling while wanting to maintain privacy.

Emilie Ferran
Licensed Professional Counselor
Online Therapist
VIEW PROFILE
Together we’ll merge the best creative and scientifically-based tools that work for you. With this in mind, I like to take an active and practical supporting role in helping you work through the crud and achieve your goals. For those seeking a more “give it to me straight” approach, I’m your gal. My preference is to keep it real, honest, and true, while also holding safe space for you to feel comfortable being your most honest and vulnerable self. This isn’t a ‘sit and listen’ type of counseling. Instead, I’ll be asking you to take real, and sometimes difficult, action in order to work through your challenges. I’m all about offering various choices, strategies, and ideas, so you may find what feels best for you.