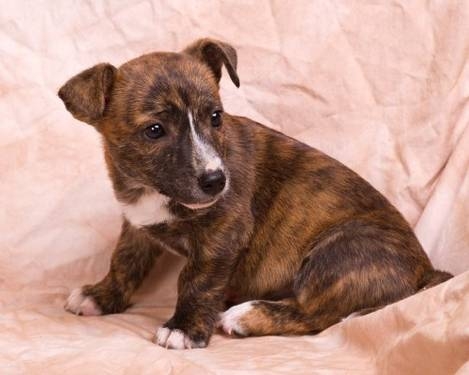 About two years after my near-death, I decided I wanted a dog. I was getting tired of being home and sad. I wanted a dog so I’d have a friend when my husband was away. I wanted a buddy to take for walks around out neighborhood. I needed something to look forward to when the fear returned.

So I poked about online and applied at a Corgi rescue. My husband (known as Fahnz henceforth) had gotten me into Cowboy Bebop over the course of our relationship–I even watched it with my mum in the hospital–and I was interested in either one of the Corgi breeds. One five-page application and two phone interviews later, it was clear that I wasn’t going to get a purebred. Back to the search.

And then Beefy appeared.

Now, let’s talk about what that name conjures up. It’s a strong name, makes you think of someone who’s large and muscular, built like a tank and aloof. Got it?

This dog was in a tiny little shelter in a tiny little town called Anna, Illinois. He and his brother and sister (Bart and Beatrice) had been removed from a kill shelter at the age of six weeks. By the time I found his picture, they were around four months old. Beatrice had already been adopted.

Still got that mental picture? Excellent.

He was a tiny little brindle lump. An odd-looking mix of corgi and whippet, with all the nervousness and silliness that particular mix can entail. Fahnz thought this little fellow was the funniest thing ever, all because of that wonderful name.

I applied for him via email and was approved to go get him in three days. All it really came down to was “Will you provide this animal a good and loving home?”

Yes, we will. And yes, we still do. He’s the best dog ever. He’s added so much to my life and has helped me tremendously with the emotional side of my recovery.