Me, Myself, I & Ignorance 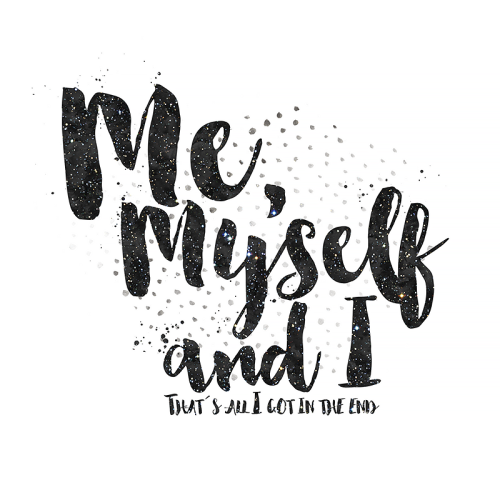 I woke up and realised that I was different.

But was it really, good?

Didn’t know what to do.

Because I was different.

And that was who I am.

But it’s okay to be different. And that’s what people need to learn. They need to know that they have a choice. There’s another way besides being forced into society’s ways. You can be you if you want to be. If you try to be. Because in the end, no one but you can help you.

I didn’t know that. And I learnt that the hard way. Being alone for so long. Not reaching out at all. A day, three weeks, seven months, two years. Time passed and I stayed the same. Or maybe I got worse. I don’t know what it was, but I woke up and realised.

I didn’t want it all to end like this. It was just one spark of inspiration on that very day and I decided to do something with that spark instead of let it all go, drench it and drown it and stay home alone, stuck in bed with fears and a jumble of words, strung into thoughts and sentences, but in all the wrong way. What could’ve said “love” became “hate” and I didn’t know how that was possible, but I accepted it and that was mistake number one. So thank goodness, that one day, Fate came alone and helped me as much as it could. After all, Fate could give me an opportunity, a chance, but I’d have to take it myself, wouldn’t I?

Me, myself and I. We did it. Us three, all together and I was okay with it. And you should be too. Being alone isn’t bad. Friends are good but so is your “me time”. I had “me time” and I rose up after a while, deciding to take the chance, the opportunity and do something with it.

And so should you, because if you believe that no one cares, you’re wrong. I care. If not anyone else, just remember that I do, okay? You don’t need to be put down, let yourself bring yourself back up. Stand up and fight back. You deserve to be fought for. Those other people who don’t believe so? They don’t matter anymore. Ignore them just like you managed to ignore life for so long. And maybe use that ignorance in a better way.