Anxiety is out to get me 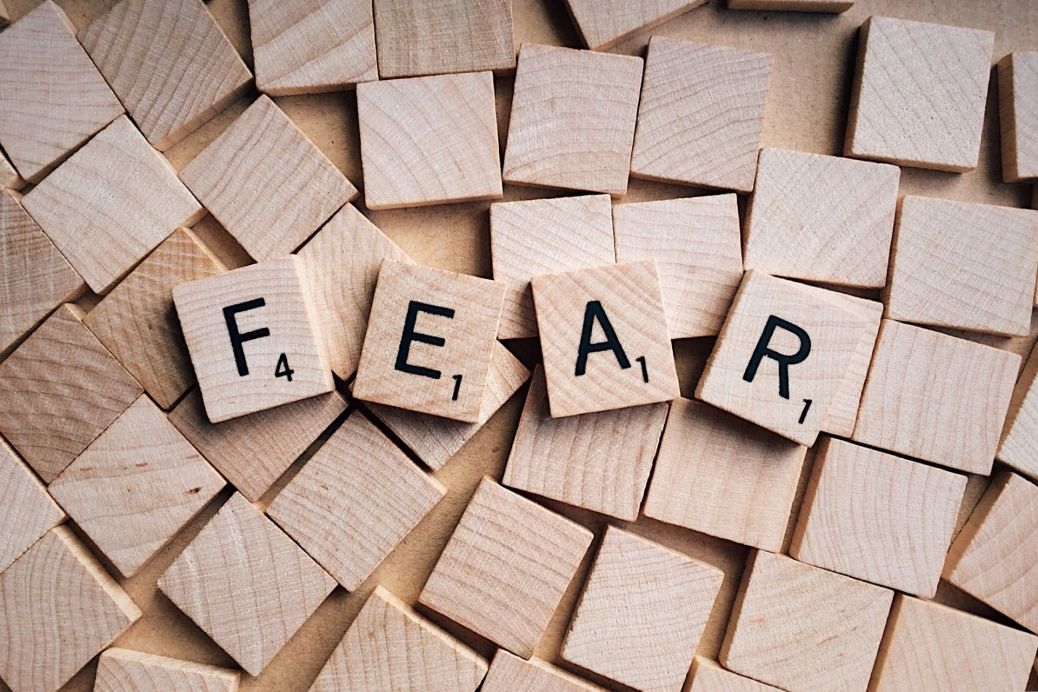 I’ll start with my things: Thing One: OCD. Thing Two: GAD. Thing Three: Health Anxiety. Thing Four: Panic Disorder.  Now that we have that out of the way, on to the stream of consciousness:

Anxiety has been my constant companion as far back as I can remember & I can remember riding in a stroller. I’m sure that any readers of this blog post already understand that anxiety has peaks and valleys. For the past few months I’ve been experiencing another peak. The shape it’s taken is a familiar one to me: health anxiety. Ironically, the focus of my fear is not the covid plague (it worries me, of course), it’s fear of the big C  (I don’t even want to write the word). It’s a terrible phobia that started when my father died of it in the early 1980s  & it grew after we found a family history of it. Over the decades since I’ve gone into various health panics about it and other deadly illnesses. In the early 1990s I got mystery bood on my hand at a convenience store & proceeded to spend the better part of a year thinking I might have HIV. Aids hotlines assured me that wasn’t a sensible fear but any reassurance I felt after talking to them lasted for hours, than I was right back to full-scale panic. I was afraid I’d give it to my family and used so much bleach in the bathroom that I fear I may have scarred my lungs. It’s hard to imagine I didn’t. It wasn’t over until I had an HIV test. It was negative (of course!). I was so afraid of that test even though I knew the odds were on my side. I’m much less brave now. Fast forward a few decades (and past other health panics) to present time.  I was doing alright (for me) but then I found a weird scaly spot on my arm that was getting a bit tan colored & I made the mistake of googling it. I saw all sorts of photos of various skin C, read horror stories & generally fell into a pit of quicksand. I should probably mention that I’m terrified of  going to the doctor & have not gone for a very long time. Fast forward, I’ve fixated on various spots and skin things, sure they were all deadly. Each time I looked one up I saw more scary photos & found out about new things to fear. As soon as the anxiety about one would abate, I find another. THAT would be the one to kill me! From there it morphed into the BIG worry… internal C. I’ve felt all sorts of internal weirdness for nearly a year that I tried to ignore and suddenly it all MEANT something. I had pelvic organ prolapse (stage 4, front and back) around 13 yrs ago and I think many of the sensations I’ve been having are likely because my pelvic floor is unhappy with gravity. I may also have a diastasis recti. BUT, I imagine the worst. I’ve focused on every sensation until I’ve become so hypersensitized that I had to buy loose pants because my waistband was causing me to feel sensations that didn’t match reality, those sensations didn’t feel like cloth touching the surface of my skin, they felt magnified and like something happening under my skin, not on top of it. It’s been making me crazy. I started getting nocturnal panic attacks. Many times a night. Each time I felt like my throat was paralyzed, my heart was racing & I feared I’d stop being able to breathe. It got so bad that I’d go right into one as soon as I dosed off, making me fear going to bed. I had been very afraid of taking meds after experiencing serotonin syndrome several years ago and because so many of them can have awful side effects (& can increase the likelihood of getting dementia), but I was NOT going to go to bed until I had something that would stop the panic attacks so I saw an online doctor who prescribed hydroxyzine HCI, an allergy pill that helps anxiety & it has less scary sounding side effects (& no increase in dementia risk). I’m taking one each night and I can finally sleep! YAY!

In the middle of my health panic my adult son (who is not a hypochondriac, thank God) developed terribly frightening symptoms of a heart attack. I called the ambulance & he was rushed to the hospital. I’ve never been so terrified. THANK GOD, it was not a heart attack or defect, it was low potassium, which can be very serious, but is reversible. He was treated and came back the same night but  I worried about him. What if they had mixed his lab work with another patients? It looked like his (they gave us the results) showed tylanol. He NEVER takes tylanol. I called an old family friend who is a physician’s assistant and she agreed to look at his lab work. I photographed it and emailed it. She was happy to see his potassium wasn’t seriously low & she told me it did NOT say he had tylanol in his system. Phew! Okay, worry level down, but still high, I listened at his door at night to hear movement. Just to make sure he was alive. That continued for awhile, the whole time I was still worried that I was dying, still fixating but not as much, because worrying about your kid… well, that’s the biggest worry there is. Finally, that seemed like less of an emergency and my anxiety turned inward full force. It’s been awful. I feel doomed. Recently I missed an entire night’s sleep, googling every possible way I might have C based on current symptoms and past ones & came across a genetic syndrome I was sure my family could have inherited. It is a syndrome that can cause C. The vary sort of C that killed my father, his mother &  her mother. I was in a full panic when, hours later, my brother looked it up and told me it primarily effects people under 50 and since nobody in our nearby family tree (as far as we know) has had that specific C at a young age, it made no sense to think we have that syndrome. I want to believe he’s right. I remember a doctor (back when I went to doctors) once told me he treated a man in his 30s who died of that C & when I was surprised and obviously worried (I was in my 30s at the time) he reassured me that it was a genetic condition that predisposed young people to get it & since that was not my families MO it was not likely that was an issue. It must have been that syndrome.  I still can’t seem to let this fear go. It’s lessened, certainly, but I feel it bubbling below the surface and I fear it will erupt like a volcano & take us all out. It feels like I/we are doomed. If a disease doesn’t get us, I think my health anxiety could. It isn’t easy to live with a hypochondriac. It can’t be.

I joined a facebook group for hypochondriacs (they call it health anxiety now… it sounds nicer) and saw my worries replicated over and over again. Often the exact things I’ve fixated on in the past. “Oh yeah, I worried about that thing in 1994 and that thing in 1989.” Some things they worry about seem kooky to me, like the time someone thought their child had a dread disease & posted a photo that revealed a callus on his foot, but then I remember all the times I thought my son might have something terrible when he was little. That mole on his ear looked weird. That mother would be me if we had facebook groups back then. Thankfully there was no internet when he was little.   As I read the posts in silence, I heard their  voices in my mind, crying out for reassurance. I heard my own desperate pleas for someone to please tell me everything is going to be okay. It was educational in a very valuable but painful sort of way (but it felt chaotic and exhausting). I’m sure I exhaust my family. At any moment, a nice day could turn into drama brought on by some new symptom. My poor family. They love me & want me well. Thank goodness that I have them but I’ve put them through a lot. One night about 3 weeks ago I woke them in the middle of the night because my left eye had gone inexplicably blurry and there was some double vision. I was thinking stroke or maybe some sort of horrible eye emergency that must be taken care of or I’d lose my sight. I was in a panic (of course) and my brother (usually a voice of reason) thought I should go to the ER. Just hearing him say those words was devastating. If he thinks I should go this MUST be a REAL emergency, not just my panic making a mountain out of a mole hill. Then something happened… my eye seemed clearer & within minutes it was 80% better. Over the next half hour it had gone back to normal The whole episode lasted an hour & a half. Then we found out that the tryptophan I had just started taking can cause blurry vision. Ok, no more tryptophan. A shame though, because for the day and a half I took it, I felt saner. In fact, I felt sort of like I had when I was taking Anafranil years ago (before crippling side effects forced me to stop). I want to try tryptophan again, rather badly, but I know I’ll panic again if it does that to my vision. It’s funny, I don’t panic when BOTH eyes go blurry because I’m used to it. Too much time looking at a screen & just the peculiar blurry vision changes that people with fibro/EDS can experience (I have those too).  Anything that happens when I’m in peak health anxiety mode is SIGNIFICANT and meaningful. That’s how it works, The gears of the anxiety perpetual motion machine roll on.

I’m here in the hope I’ll find new ideas that can help me get to a valley and stay there. You want to know the worst bit? My son was sick for TWO WEEKS before he told us. He waited until he was having severe heart symptoms because he knew I’d panic. He didn’t tell me that’s the reason, but I think it is. When he finally told us, he looked at me and gently said “now don’t panic” before saying he needed to go to the ER. I HAVE to get better for his sake, for mine & for the rest of my family. I’m here seeking ideas. I take a lot of anti-anxiety supplements and I’m hoping to learn of new ones to try. I want to know what works for other people. I’m hoping to learn of new treatments, theories, and what new meds might be on the horizon.