Reveries of the Solitary Clicker

Interesting short piece in the NY Times yesterday. Given all the talk I see on this site about mindfulness, Facebook, and the common depressive state of feeling that one is "existing not living," I thought I'd share it. It makes a heck of a lot of sense to me.

I've never done Facebook (which some research has indeed associated with higher depression rates), and have to admit that as much as I truly like, enjoy, and care about my friends here, the more time I spend on this site, the more down I tend to feel–probably because it is sedentary, virtual experience. I need more "actuality" in my life and sometimes manage to get it. Other times, fear keeps me stuck in my apartment, away from other people, away from healthy challenges, and away from more variegated experience.

I wish a bunch of you lived closer so we could directly help one another live out in the world–and therefore in our own skins–more fulfillingly. Sigh.

THE 300th birthday of Jean-Jacques Rousseau falls next week, and it is only proper to wish him a happy one. He had a few choice words to offer on the theme of happiness — the sort associated not with fleeting social pleasures but with “nothing external to ourselves, nothing if not ourselves and our own existence.” 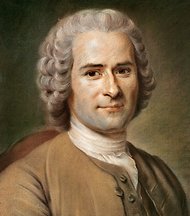 In 2010, two Harvard psychologists, Matthew Killingsworth and Daniel Gilbert, performed a study that used an iPhone app to ask volunteers, at random moments, what they were doing and how happy they were. They discovered that we spend most of our lives not thinking about what we are doing at that moment, whether it’s shopping, eating or, in particular, working. No matter how enjoyable or unenjoyable the activity we’re engaged in is, this gift for distraction comes at a psychic cost: “a wandering mind,” they wrote in the journal Science, “is an unhappy mind.”

No one seemed to remark on the incongruity of scientists’ using a technology that, in studying their subjects’ inability to focus, interrupted their focus.

The paradox would not have been lost on Rousseau, who believed we were happy only in our original state of nature — before the advent of technology and society. It was not that our thoughts did not yet wander but rather that there simply were no thoughts, wandering or otherwise, knocking about inside our heads. Our soul, “agitated by nothing,” gave itself up entirely to “the sentiment of its present existence without any idea of the future.” Our first ancestors stood Descartes’s axiom on its head: I don’t think, thus I truly am.

And then the apps appeared — language and technology, dance and song. Our ancestors began to make commodities and conveniences — things they hadn’t wanted before but could not do without now. “To lose them was a misfortune, to possess them no happiness,” Rousseau wrote. Even sex — the activity, according to the Harvard psychologists, when we are most focused and happiest — was no longer enough. We now demanded to be loved as well.

These passions tore us from our thoughtless and anxiety-free selves. Suddenly, “each one began to look at the others and to want to be looked at himself.” No longer content with mere being, we now had to be seen. Today that means clinging to our iPhones; originally, it meant crowding around the communal fire; in Rousseau’s day, there was the theater.

“You have ruined Geneva,” Rousseau wrote to Voltaire in 1760, after the Enlightenment dramatist sought to introduce a theater there. “I hate you.” Upon reading the missive, Voltaire concluded that his erstwhile admirer “had gone off his head.” For Rousseau, though, theater was little more than an app of a broken society, and it was the world that had gone wrong.

In a series of remarkable works, starting with “Discourses” and ending with “Letter to d’Alembert” and “Reveries of the Solitary Walker,” Rousseau pursued the same wandering and disconsolate selves that the Harvard psychologists in turn sought to quantify, and blamed theater for much of their suffering. Staged productions representing life, he believed, distracted us from one another, and from ourselves. Theater replaces lived experience with vicarious experience and condemned participants to wander the sea of the non-present. “Nothing appears good or desirable to individuals that the public has not judged to be such,” he observed, “and the only happiness that most men know is to be esteemed happy.” Status updates and emoticons: Rousseau saw it all.

In a modern world, when can we come closest to our original, thought-free happiness? Well, the Harvard psychologists noted that, after sex, the two activities during which we are most fully in the present are conversation and exercise. Rousseau saw this as well, but forget the treadmill: he lost himself in mountains and valleys and, while walking, conversed with himself. Indeed, “Reveries of the Solitary Walker” is a manifesto on the benefits of wondering while wandering.

At all times, the Harvard psychologists invite us to click onto their Web site, Trackyourhappiness.org, in order to know how happy — or at one with ourselves — we are at any given moment in the day.

Rousseau, though, would say that happiness lies not in clicking, but in being. Bon anniversaire, Jean-Jacques: may our gift to you be recapturing the present you gave us.