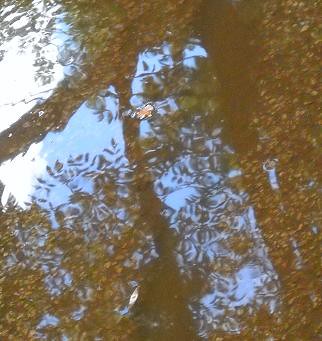 This blog got mussed somehow, and had to be corrected – it was originally posted in the wee morning hours today:

I thought I was going to be okay tonight.  I tried to relax.  To take it all in slowly.  To thread some logical thought through all this confused, racing, chaos…

I am trying to process some new realizations.

Talking to my shrink yesterday has led to some sort of delayed catharsis.  Mostly because I delayed confronting the issues involved.  Now that I have…  I am forced to acknowledge that my perceptions are warped – the Bipolar Disorder does that.  But, I was so sure about some things…  things that I now see…

I used to be sure about where I belonged.  I was certain who were my friends were.  I was sure about what I wanted to do, every day – there was a simplicity to all that.  And then, there was a chaotic, messy transition, and I became less sure of most things.  But, there were things I thought I understood.  Things that were helping me try.  Feelings and changes that…  were scary and crazy, but…  it all seemed to be leading someplace better than anywhere I had been in a long time.

I’ve been so off base, about so many things, and maybe, that’s because I don’t see things clearly.  Maybe, I see what I want to see, or need to see.  Maybe, I never stopped trying to live inside my fantasies.  Maybe, I just tangled all that up with my reality.  Maybe, I am still warped in my perceptions of what is, and what ought to be – I based SO much on the way I saw things, at the time, and now…  I know, that at a pivotal moment in my life, when I was making decisions that redefined EVERYTHING…  my mind was so warped…  that I was completely blind.  I just…  didn’t understand anything, then.  I was completely lost.  I thought there were a few things I did understandm in spite of everything, but I was mistaken.  I was completely disconnected from reality.

So much has sprung out of a situation that I didn’t even realistically comprehend.

Good things…  and yet…  I feel quite strange about it all.  Is that just my disorder, again, trying to rationalize a back slide?

I don’t think I would go back to that life.

I really should know better.  I am twenty eighf years old – Bipolar or not, I should know the score.

I need to sleep on this sh*t, and try to figure it out tomorrow.